Listen: These Are Powers

Get the best track off the up-and-coming trio's SPIN-approved new album. 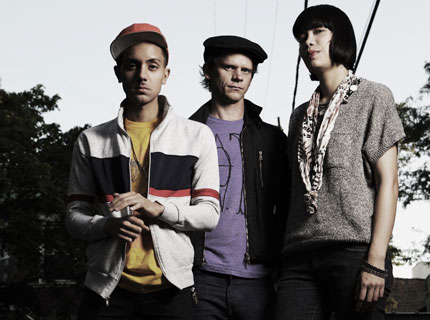 With laptop-generated rhythms and eardrum-shredding blip and bleeps, Brooklyn, NY, art-rock band These Are Powers bring the noise — and it sounds awesome!

The trio, headed by former Liars bassist Pat Noecker, just released their SPIN-praised debut record, All Aboard Future. And you can download one of its best tracks, “Adam’s Turtle,” below!

The song is a clamorous affair, with trunk-rattling bass and vocalist Anna Barie’s eerie chants — both of which validate the band’s self-coined “ghost-punk” genre. But underneath the surface, the song finds swagger in jagged guitar and driving drums, giving an anchor to these otherwise freeform sounds.

Stream the track below. And leave your thoughts in the comment section.

Listen: These Are Powers, “Adam’s Turtle” (Listen on Apple Music)