Click here to find out about the band's Grammy protest against digitally manipulated vocals. 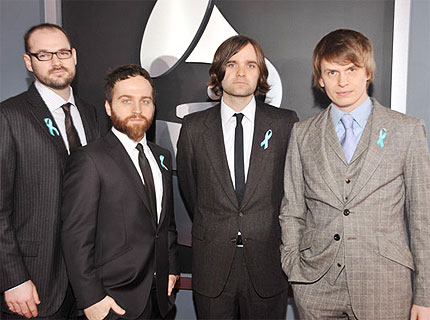 Maybe we’re not giving them enough credit (who knows what crazy gun show is happening underneath those fancy suits), but frankly, we’re skeptical about the odds of geek chic-tastic Death Cab for Cutie triumphing in a face-off against today’s Auto-Tune devotees.

Still, you have to respect their bravery. The indie pop quartet launched a protest against the prevalence of Auto-Tune — the pitch-correcting recording technology that gives tracks that special, not-really-real sound — notably championed by such artists as T-Pain, Lil Wayne, and Kanye West (not to mention Auto-Tune pioneer Cher in her “I Believe” heyday), and they did so on music’s biggest night, on the Grammy red carpet!

The band announced their campaign against “Auto-Tune abuse in music” by wearing blue ribbons on their suits to the Grammys (where they lost to Radiohead in the category of Best Alternative Music Album). [via MSN UK]

“Auto-Tuning is a digital manipulation, a correction of a singer’s voice that is affecting literally thousands of singers today and thousands of records that are coming out,” said frontman Ben Gibbard. “So we just want to raise awareness while we’re here and try to bring back the blue note… The note that’s not so perfectly in pitch and just gives the recording some soul and some kind of real character. It’s how people really sing.”

Okay, Death Cab. We dig the clever, hall-monitor-style foray into humor, and we’re sure many would agree with your mock-campaign. But with the entire world watching, and the American economy headed into a Greater Depression, couldn’t they have used the platform for something a little more, you know, important?