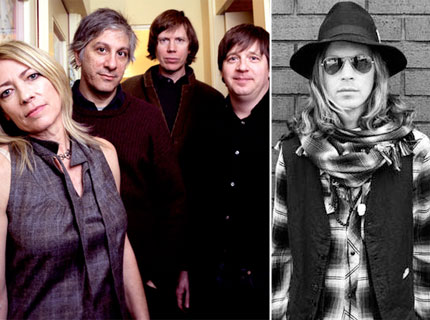 For the second year running, mom and pop indie music venues willmark Record Store Day, April 18, by offering musical incentives to get buyers through their doors.

Indie record label Matador is supporting the worthy endeavor with the release of a series of limited edition vinyl specials that will be available exclusively in participating stores.

Sonic Youth and Beck are the latest artists to announce their involvement — they’ll cover each other’s tunes for one of the records, with Sonic Youth taking on “Pay No Mind” (off 1993’s Mellow Gold), and Beck offering his take on “Green Light” (off 1986’s EVOL).

Other installments in the series include a previously unreleased LP of a 1997 Pavement show in Germany as well as 7-inch that pairs Jay Reatard’s “Hang Them All” with Sonic Youth’s “No Garage.”

Only 2,500 copies of each record will be available at participating Record Store Day outlets. Click here to find your nearest store.