Check out video of the indie rockers playing "Born in the U.S.A." and more at a private party for the President's staff! 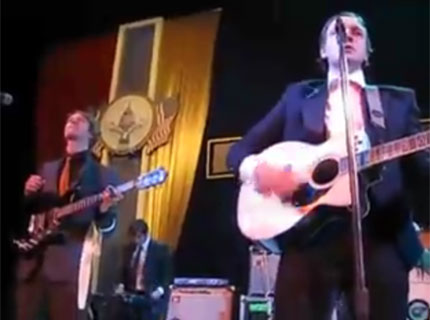 Americans have plenty to celebrate this week with President Barack Obama’s inauguration — especially those who volunteered to make his campaign a success. As a “thank you” to his team, Obama tapped the Arcade Fire to play the Staff Ball Wednesday, and the band treated the hardworking crew to original material, plus a cover of SPIN cover boy Bruce Springsteen’s “Born in the U.S.A.”!

Below, check out video of the Arcade Fire — who have collaborated with Springsteen before — playing the classic tune, as well as “Intervention” from 2007’s Neon Bible. FYI: Though the band hails from Montreal, frontman Win Butler was in fact “Born in the U.S.A.” Woodlands, Texas, to be exact.