LISTEN: Get the debut song from a founder of the Arcade Fire and his three high school pals! 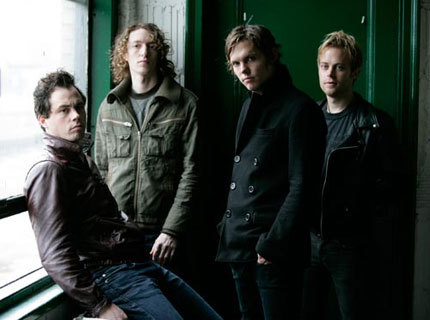 Attention, ex-members of high school rock bands: Don’t give up hope! At least that’s the moral of Wild Light’s story. After inauspicious beginnings as a teenage punk outfit from New Hampshire, the quartet reunited after college to form Wild Light, only with a bit more rock’n’roll seasoning, thanks to keyboardist/bassist Timothy Kyle’s stint as a founding member of the Arcade Fire. Now, after opening shows for LCD Soundsystem, MGMT, Clinic, and their pals in the Arcade Fire, Wild Light are poised to release their debut, Adult Nights, on March 3.

The ambitious album is loaded with vocal harmonies from all four members, a touch of melancholy, and bright-eyed, expansive choruses, all crisply produced by Rob Schnapf (Elliott Smith, Beck). Fans of the National and White Rabbits should listen up.

Decide whether the formula’s a winning one by checking out “Heart Attack,” available here as a download for one week only!