Paul McCartney and Ringo to Reunite?

"I would love to," Macca says of working with the Beatles drummer again. Click here to watch his View interview! 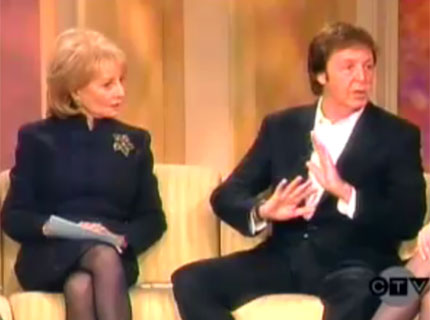 “Yeah I would love to,” McCartney told the cast of ABC’s The View, when asked about reuniting with the legendary sticksman.

“Sometimes he’ll be on tour when I’m not,” McCartney continued. “But we don’t rule it out, it’d be great. He’s a great drummer and we’re used to each other.”

“Lets hear it for Ringo,” he added as the audience applauded.

McCartney and Starr last worked together in 1994, when the pair met with late guitarist George Harrison, who died in 2001, to record new takes on demos written by John Lennon for the Beatles’ Anthology series of CDs and video documentaries.

Below, watch video of the McCartney interview, which includes comments about his recent trip to Israel and working with John Lennon. Fast forward to the 4:43 mark to hear the Beatle dish on reuniting with Ringo.