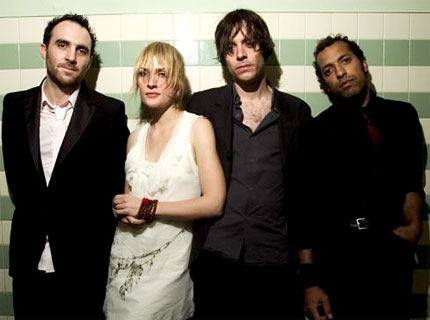 Perhaps waiting four years to release your latest album develops your taste for risk-taking. At least, that’s the way Metric seems to see their decision to self-release Fantasies, due out April 14.

“We just said, ‘Oh fuck it, lets gamble,’ took a deep breath and decided to put this record out worldwide our own way,” frontwoman (and perennial indie crush) Emily Haines said in a statement. The way guitarist and album co-producer Jimmy Shaw sees it, though, they really can’t lose: “We might go down in flames, or it might be the best move ever,” he said. “Either way it will have been on our terms, and that for us is success.”

Shaw describes the sound of Fantasies as “really big and really dreamy,” while Haines has said that the music is “based in simplicity.” Fantasies will available for pre-order beginning March 2 on the band’s website, where those who reserve an advance copy will be rewarded with an MP3 of the first single off the album, “Help I’m Alive.”

The single was written by Haines during a trip to Buenos Aires, where, as she explains in a candid video interview, she was able to face and conquer her fears about the direction of her life and writing music. “It was the one place where I could discover myself,” she says. “I needed the music I was going to write for this record, which will dictate the next chapter of my life, to be based in simplicity and really genuine.”

Thought exact dates have yet to be announced, Metric will embark on a headlining U.S. tour this June.

Below, watch video of Haines and Shaw performing an acoustic version of “Give Me Sympathy,” a new album track exclusive to SPIN.com.

Watch: Metric, “Give Me Sympathy”