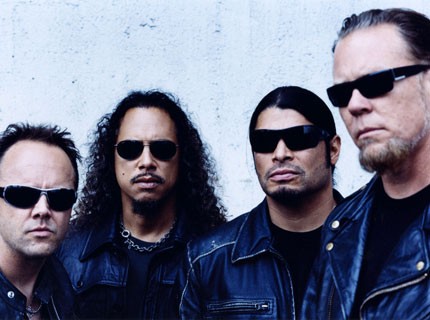 Metallica are on a roll! Following the release of their SPIN-praised new album, the chart-topping Death Magnetic, the metal titans have been voted into the Rock and Roll Hall of Fame!

The news follows a banner 2008 for Metallica: the quartet blew minds with an epic set at Bonnaroo, kicked off a monstrous, pyro-heavy world tour, and unveiled a creepy, zombie-filled music video.

Hell, they even worked with Activison to create their own Guitar Hero game. Yep, it was definitely one of Metallica’s best years ever — period.

The band, which formed in 1981 in Los Angeles, will be inducted to the Rock Hall in their first year of eligibility (an artist or group must have released their first material 25 years prior to be eligible). Metallica’s debut was 1983’s Kill ‘Em All.

Along with Metallica, hip-hop pioneers Run-DMC, guitarist Jeff Beck, singer Bobby Womack, and doo-wop/soul group Little Anthony and the Imperials will be inducted during a ceremony at the Hall of Fame in Cleveland, OH, April 4. It will be the first time since 1997 that the ceremony has taken place in Cleveland rather than New York City. Furthermore, this year’s ceremony will mark the first time that tickets will be available to the general public.

The induction ceremony will be broadcast live on Fuse TV. More details will be announced soon.