Do Bono and Co. reinvent rock'n'roll with the first song off No Line on the Horizon? Decide for yourself. 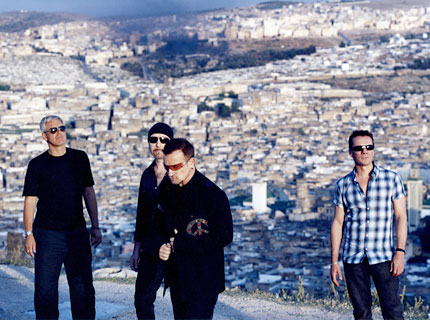 The first taste of U2’s new album, No Line on the Horizon, is finally here. And it seems those lofty comments about reinventing rock’n’roll weren’t too far off: “Get on Your Boots,” the album’s first single, finds the boys churning out jagged, hard rock guitars over drum machines and African percussion — guess that’s why the band decamped to Morocco to record the new material!

But at least one things remains the same: Bono’s socio-political lyrics. “Women are the future / All the big revelations / I don’t want to talk about war between nations,” he talk-raps before chanting, ” You don’t know how beautiful,” in a careening bridge full of distorted guitars.

Head over to U2.com to hear “Get on Your Boots.” And then leave your thoughts about the band’s new direction in the comment section below.