If the "I Kissed a Girl" singer disses her again, Allen will expose Perry's phone number on Facebook. Click here for details! 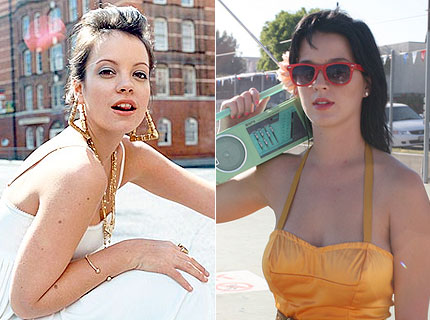 Call it a hunch, but we’re pretty sure that “forgive and forget” was not included in Lily Allen’s New Year’s resolutions.

The outspoken Katy Perry is continuing to pay the price of 2008’s “skinnier-version-of-Lily-Allen”-gate, as UK newspaper Sun reports that Allen recently bragged, “I have Katy Perry’s number, someone did me a favour [sic]. I’m just waiting for her to open her mouth one more time — then it hits Facebook.” [via Gigwise.com].

Allen is also reported to have joined two anti-Perry groups on Facebook: “I hate Katy Perry and her dumb-ass song ‘I Kissed A Girl’” and the group “Katy Perry? Who in the hell does she think she is?“

Come to think of it, we might start our own Facebook group and call it: “Seriously Katy Perry, Don’t Fuck with Lily Allen.”