Led Zeppelin: “We Will Tour and Record Without Robert Plant” 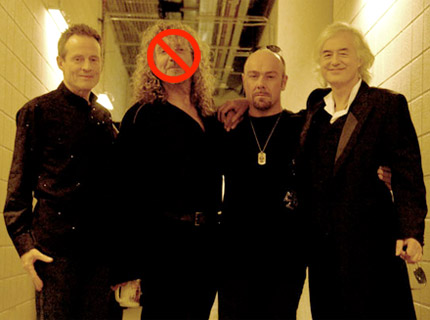 [Update, Jan. 8: To further complicate the issue of a Led Zeppelin reunion tour and album (discussed below), Jimmy Page’s manager Peter Mensch this week told MusicRadar:“Led Zeppelin are over. They tried out a few singers, but no one worked out… The whole thing is completely over now.” Stay tuned for more. ]

After months of confirmations, denials, counter-denials, and, uh, Twisted Sister Dee Snider’s thoughts, the manager of Led Zeppelin guitarist Jimmy Page has confirmed that the rock titans plan to reform for a new tour and album sans singer Robert Plant.

Peter Mensch spoke to the BBC about the remaining members’ plans: “They did the show with Robert Plant; they had a really good time rehearsing, the three of them, before Robert showed up. And they decided that if they could find a singer that they thought would fit their bill…that they’d make a record and go on tour. We just need to find a singer.”

However, Mensch remained mum on the potential candidates for the position, which have been rumored to include Soundgarden’s Chris Cornell and Myles Kennedy of God-rock Creed-castoffs Alter Bridge. But he assured fans of one thing: “It’s gonna be a long and difficult process. And we’re not soliciting people! So don’t call me about it!”