BIG IN '09: Meet the most appealing pop star named after a Michelle Pfeiffer movie since Scarface, and download two of her MP3s! 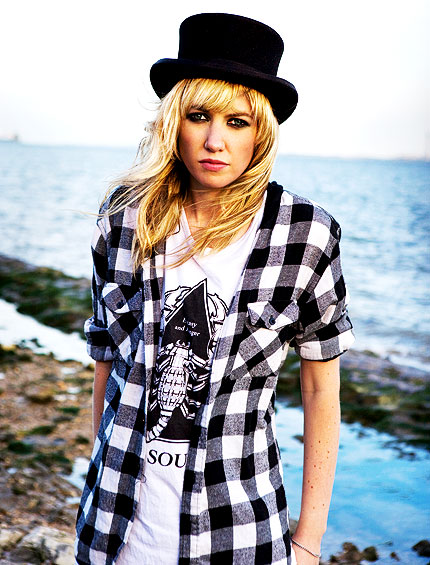 She may be a bottle blonde with a taut midriff, but Pip Brown is sick of getting pegged as a would-be Britney. “People assume when they see me live for the first time that my drummer wrote all the music,” says Brown, a.k.a. Ladyhawke. “If it was a guy standing up there with a guitar singing, nobody would assume he wasn’t the writer.”

Brown does have some cause for resentment. Far from a fluffy pop avatar, the 28-year-old singer-songwriter not only played guitar, bass, and synths on her self-titled debut album, but also cowrote every one of its giddy dance-pop gems — songs whose sound and preoccupations flow straight from the ’80s, with a modern bloggish sass. (“I see you had a hit in ’89,” she taunts a fallen star on “Professional Suicide.” “Too bad we all don’t age as good as wine.”) The irresistibly bubbly roller-rink jams recall an age before most singers came straight from Disney kiddie shows. “Those manufactured stars have given pop music a bad name,” she says. “It doesn’t necessarily have to be something cheesy.”

Brown grew up in New Zealand and at 18 played lead guitar in her first band, named for the early-’70s existential road movie Two-Lane Blacktop. After moving to Sydney, she formed an art-rock duo called Teenager and by 2005 went solo, lifting her new moniker from a 1985 fantasy flick starring Matthew Broderick and Michelle Pfeiffer as a woman cursed to live her days as a bird. Around this time, Brown was diagnosed with a curse of her own: Asperger syndrome, a mild form of autism that makes social interactions — concerts especially — trying. “It’s hard having everyone staring at you,” she says. “At first, I thought if the audience was really into it, I would have a good show. But I realize now that that doesn’t matter.”

Luckily, she’ll soon have plenty of chances to hone her craft — she kicks off a U.K. tour with the Ting Tings in February, and then she’s planning to do “heaps and heaps” of U.S. shows. She’s also working on a new album she promises will be much “rawer and not as tech.” At least for now. “I know I’ll change my mind,” she says. “Maybe it’ll turn out to be a hip-hop album.”

Ellen Carpenter
Tags: big in 09, ladyhawke, This Is Happening

Ladyhawke: Ten Things You Never Knew About Me