The pair finally unite after the Raconteurs rocker bailed on a prior musical meeting. Click here for the scoop! 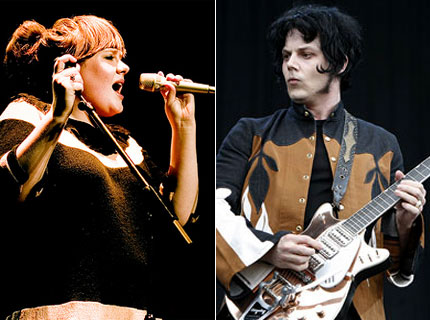 Don’t you hate it when you get stood up because of your partner’s plans with 007?”

British singer Adele has revealed that she was on the receiving end of that excuse when her studio date with Jack White was cancelled due to some pressing musical matters of the Quantum of Solace variety [via NME.com].

“I was well annoyed with [White] because we’d arranged studio time together but then he had to go and record the James Bond theme tune,” she told the Daily Star.

We can understand why Adele was confused by the cancellation: The pair previously worked together on a version of the Raconteurs’ “Many Shades of Black.”

But the Brit songbird added that they finally got together. “We ended up doing some stuff in London,” she said. “He’s a good laugh and I’d like to do more.”

Adele has also recently collaborated with another Jack — Jack Penate. “I’ve done some backing vocals for Jack’s new album too. He’s one of my best mates,” she said. “It’s very exciting stuff. It’s not as indie or guitar driven as his first album. People are going to be surprised.”