Check out DJ Minty Fresh Beats' curious combination of tracks from the New York rapper and the Brit brainiacs. 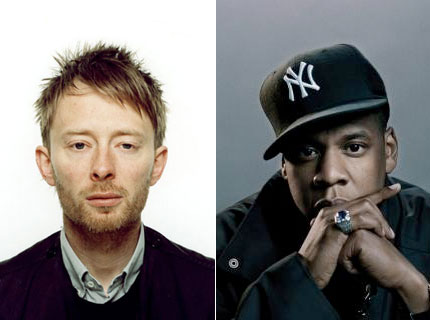 Jay-Z is no stranger to involuntary collaborations with the rock’n’roll elite; remix wizards across the web have mashed his tunes with those of bands from Oasis to Pavement and beyond. And now he has another musical partnership to add his lengthy list: Radiohead.

Unlike Danger Mouse’s sensational The Grey Album, which united Jay’s Black Album and the Beatles’ self-titled “White Album” track for track, Jaydiohead mashes an array of songs from both artists, including pairs like The Black Album’s “99 Problems” and Kid A’s “Nation Anthem” (remix title: “99 Anthems”), and American Gangster’s “Fallin'” and In Rainbows’ “15 Step” (“Fall in Step”). The man behind the mix: New York’s DJ Minty Fresh Beats, who premiered Jaydiohead on his MySpace page December 30.

To download the complete album, visit Jaydiohead.com. And then leave your thoughts on the mix in the comment section below.