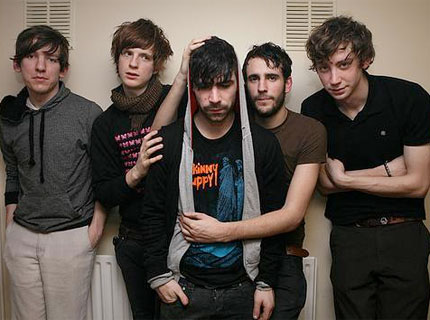 UK buzz band Foals may have just released their debut album Antidotes last March, but they’re already hard at work on the follow-up and have decided to share their efforts with fans by releasing three free downloads on their MySpace page.

Commenting on the new material, frontman Yannis Philippakis revealed that the band’s second album was suffering from a bit of Seasonal Affective Disorder, “sounding less and less surf the colder it gets.”

Still, he’s not so S.A.D. he can’t share: “I figured it’s time to embrace the transparency of the Modern World (TM) and expose some snippets of what we’ve been working on,”the Oxford-based singer said, going on to introduce the sampler as: “Me messing round late at night lonely on a loop pedal. It’s for the most part formless and semi-instrumental.”

“I’m willing to buy sunshine off any friendly mammals in the Southern Hemisphere,” Philippakis later wrote. We know one person we won’t be enlisting to help us shake those winter blues.