Plus: The comedic Kiwis channel Meat Loaf and collaborate with Sia on their next record. Click here for the scoop! 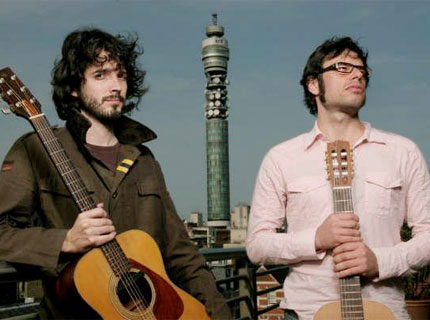 If a sneak peek at the premiere episode is any indication, the second season of New Zealand comedy duo Flight of the Conchords’ HBO series (premiering Jan. 18) will surely be required viewing in 2009. And judging from details for their follow-up to last year’s SPIN-approved debut, it seems like Bret and Jermaine are about to hit us with some required listening as well.

The duo’s yet-to-be-titled sophomore record will arrive April 14 via Sub Pop, and according to the Seattle label’s A&R head Tony Kiewel, the album will feature even more genre-hopping than their first effort. “More than one of them [songs] leans on a ’70s soul sound,” he told Billboard.com. “I’ve also heard this choir-y sort of thing, a Meat Loaf-y sort of thing, and a crazy top 40-type jam.” Kiewel also said Australian songstress Sia sings on one track.

Luckily, fans won’t have to wait until April to hear the new material. Not only will the songs be featured on the Conchords’ TV show, but full-length versions will also be available for purchase the day after new episodes are aired, with the first single, “Angels,” hitting iTunes Jan. 19. Those who pre-order the album through Sub Pop will receive the singles as they’re released, as well as five tracks that won’t air on television.

Until then, we can only await the release of “Angels” — and hope that it doesn’t sound anything like this.