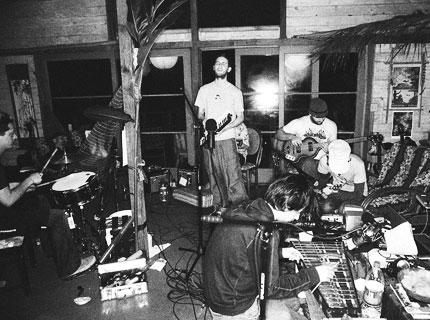 What happens when you take 14 musicians, fly them to Hawaii, have them live together for 30 days, and record the results?No, not the latest reality TV show — but Operation Aloha, the self-titled debut from a new supergroup that includes members of Maroon 5 (guitarist James Valentine and keyboardist Jesse Carmichael), Phantom Planet (bassist Sam Farrar), and Gomez (frontman Ian Ball, multi-instrumentalist Dajon Everett, and drummer Olly Peacock).

The gaggle of musicians — also including members of All Spots To Black and Kahn Brothers — found time in their schedule to live and record in a compound of tree houses situated in Maui, Hawaii. And their sessions resulted in Operation Aloha,which will be self-released by the band May 12.

A tracklist is still forthcoming, but for now listen to album tune “Failure,” featuring electric guitar, ukulele, and Ian Ball’s throaty lyrics about a girl from the mainland who’s “not your regular Mrs. Robinson.”