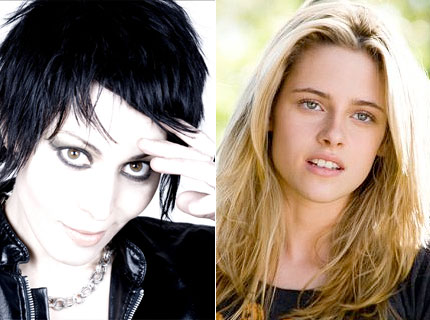 Twilight is a hit, and so is the film’s female lead Kristen Stewart, who has signed to play legendary frontwoman Joan Jett in The Runaways, an upcoming biopic on the seminal 1970s rock quintet of the same name. [Via Billboard.com]

The group, originally formed in 1975, was one of the first successful entirely female rock’n’roll acts and is best known for barroom classics like “Cherry Bomb.”

The movie will center around Jett — who went on to a successful career as both a solo act and as the leader of the Blackhearts — and singer/keyboardist Cherie Currie, and will follow the band’s tumultuous four-year career. Floria Sigismondi, who wrote the screenplay, will direct, while Jett will executive produce.

Though Stewart will have to work around filming two Twilight sequels, The Runaways is slated for a 2009 release.