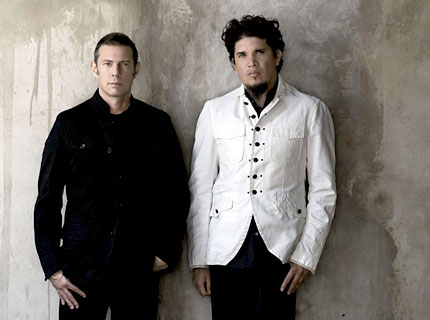 What? America’s political sentiment may be optimistic following Barack Obama’s historic presidential win, but leave it to electronic genre-hoppers Thievery Corporation to remind folks that all is not perfect. Using lyrical diatribes, bossa nova grooves, jazz fusion, and world music, the duo speak out about the war in Iraq, social unrest in the era of George W., and more on their impassioned fifth record, Radio Retaliation. And with a North American tour planned for this coming winter (tour dates below), the Corporation will be moving minds and shaking asses way into 2009.

Who? Rob Garza and Eric Hilton formed Thievery Corporation in the summer of 1995 over drinks and jazz records in their hometown, Washington, DC. After releasing a series of singles and records, the Corporation achieved widespread recognition for their third outing, 2003’s The Richest Man in Babylon. Radio Retaliation is Garza and Hilton’s first official release since 2006’s Versions. Over the course of their career, they’ve run the Eighteenth Street Lounge, a D.C. club and recording studio, where they’ve collaborated with a wide range of artists, including David Byrne, Norah Jones, and the Flaming Lips’ Wayne Coyne.

Fun Fact:Thievery Corporation take a high-minded political approach to their art, but that doesn’t mean they shun capitalism; their music has been licensed for commercial use in various advertisements, movies, and video games, including The Garden State, The Sopranos, and strangely, Cricket 2005, a video game based on that wacky English spot called cricket.