The former Pavement rabble-rouser tells SPIN.com about plans for the quartet's upcoming record. 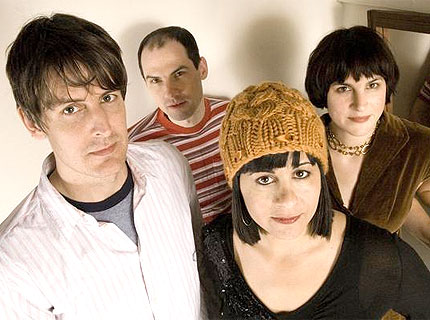 On the phone, indie-rock wordsmith Stephen Malkmus is exactly as you’d imagine: Gregarious, silly, preternaturally comforting, and entirely friendly. And it’s in this tone that he delivers some very exciting news: Stephen Malkmus and the Jicks are gearing up for their next record.

“In June we’re planning to do the new album,” he tells SPIN.com. “Now we’re just trying to find the person to do it with and the place to do it.”

“We’ve been playing, like, six of the new songs live, often to the chagrin of some people who have never heard ‘em before,” Malkmus explains. “There’s ‘Sentimental Lesbians — it’s a working title…. There’s one called ‘Astro Facial.’ and there’s ‘The Del Rey Song,’ which is influenced by a guy named Del Rey [a blues/ragtime singer] — but, as usual, it doesn’t sound like him.”

So what do the new songs sound like? “There are some catchy upbeat ones influenced by playing live. And then there are some [that use] time signature changes on classic rock forms — things that people wouldn’t have bothered to do back then, but you have to now because you don’t want to sound like some retro band….There’s one song that sounds like the Cribs, which is a band from England. And there’s a waltz — there’s always a waltz.”

Malkmus hopes to get the yet-to-be-titled record out in 2009, but that may be a bit ambitious. “That’d be nice, but it’ll probably be February [2010] because, you know, we’ll finish it in August because we’ll just be getting it perfect — and then the cover art won’t be ready.”

In the meantime, fans can get more Malkmus on the reissue of Pavement’s Brighten the Corners, which recently arrived remastered with tons of B-sides. But don’t expect a reunion — at least not anytime soon.

“Pavement was a really hardworking band through the ’90s, so it wouldn’t be surprising if we wanted to revisit that,” Malmus says. “The option’s open. But the Jicks are so good that there’s not a reason to go back right now.”