Click here to find which up-and-coming group the divisive Brit frontman is writing songs for! 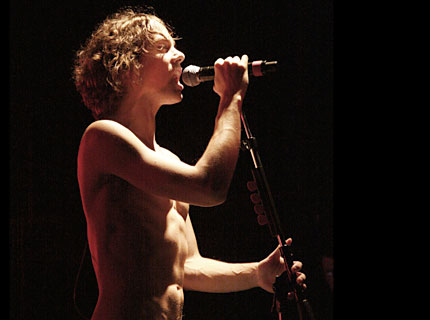 You’ve got to hand it to Razorlight’s Johnny Borrell: He’s nothing if not self-aware.

Borrell is so in touch with the fact that the music media are not always his staunchest supporters, that he’s been purposely keeping mum about the tunes he’s written for up-and-coming UK band Florence and the Machine. Why? He thinks that his being linked to the group could work against them.

“Florence and the Machine are friends of mine but I haven’t really talked about [writing songs for them] before because the press always get the wrong idea and they’re just starting out,” Borrell recently told UK newspaper the Daily Star [via NME.com].

Aw, it’s just like that Steve Martin movie Roxanne where he’s so ashamed of his giant nose that he has someone else take credit for all the love notes he pens to his crush. Only, you know, with a cocky, indie-rock frontman with a normal-sized nose.