Read about Rock's love for Pam Anderson -- and Britney's similarity to elephants. Honest! 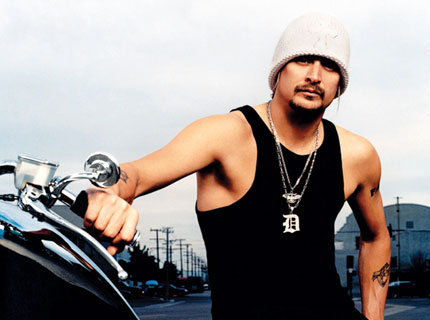 It’s been a banner week for PETA. First, Kid Rock accused the animal activist group of taking advantage of defenseless actresses. Rather than retort, “I know you are but what am I?” the group played Freud, stating that Rock’s cranky, fur-wearing ways were an expression of his latent feelings for ex (and prominent PETA supporter) Pamela Anderson.

“Hell hath no fury like a man scorned,” the group told Gigwise.com. “Though his relationship with PETA pal Pam Anderson ended years ago, Rock is clearly still wearing his heart on his fur sleeve. ?Maybe one day this kid will grow up and grow out of his cruel wardrobe.”

Touché PETA. But Rock isn’t the only one on the group’s “To-Reprimand” list this week. Next up: Britney Spears. PETA is none too happy with Spears’ use of elephants in her latest video for new tune “Circus” [via NME.com]. Blogging on their website, PETA’s Christine Doré compared the elephants to Spears herself.

“As Britney is such a victim of the paparazzi and always complaining and crying about how she hates to be held up in her guarded house and can’t feel free, she of all people should be able to relate to the horror that captive animals go through when they’re used for entertainment,” Dore wrote before pointing out that the main difference between the elephants and the pop star (besides the size and shape of their trunks, of course) was that Britney chose her lifestyle while performance animals were powerless to do so.

“Britney is now just an ‘outrageous’ and ‘toxic’ mess. I certainly don’t want her to ‘gimme more,’ and neither do the animals who have been abused so that she can feel ‘lucky,'” Doré concluded, exhausting the rest of the year’s supply of puns and quotes. (Here’s hoping someone stored a few away for a rainy day in case there’s a Kid Rock rematch).

PLUS: Watch Alicia Silverstone bare all in her veggie testimonial!