New Noah and the Whale EP Due Soon

The Brit indie-folk quartet goes punk on this month's A Sides project -- plus, reveals plans for another full-length. 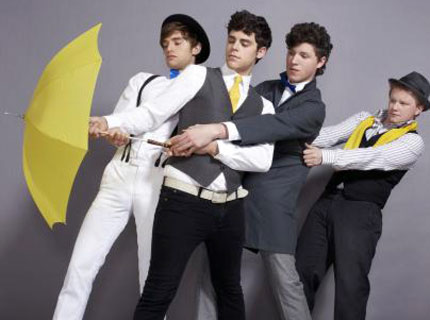 London folk rock outfit Noah and the Whale may have just released their debut album stateside this fall, but they’ve still got you covered for Christmas. The quartet have unveiled a punk side-project called the A Sides just in time for the holidays.

“We had some spare studio time and we recorded an album over two nights with a one-take rule,” drummer Doug Fink told BBC Newsbeat of the new seven-track offering. A release date has yet-to-be announced, by the album is expected later this month.

Fink also revealed the band is already hard at work on their second album as Noah and the Whale, describing the sonic approach as, “slightly more atmospheric, maybe slightly bigger, more electric than the first album.” Apparently the new effort will also feature a cinematic component. “The way it’ll work is it’s going to be one long music video. The album will be effectively the one song and the video will accompany that,” he explained. “There’s a loose storyline. There will be narrative. It’s about seasons and it’s about time.”

Hmmm…storyline and multimedia component? Dare we use the “C” word? “Concept album is a word we try and shy away from,” Fink was careful to add. “But [frontman, and Doug’s brother Charlie Fink] has thought about it as one piece and that’s how we’re trying to approach it.”

Watch: Noah and the Whale, “Shape Of My Heart”