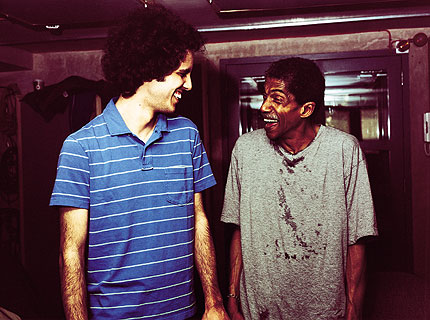 What? Like chocolate and peanut butter,Elton John and Brandon Flowers, orDave Grohl and the Prodigy, some unlikely pairs go together perfectly. Case in point: British electronic knob twiddler Kieran Hebden (a.k.a. Four Tet) and jazz drumming mastermind Steve Reid, who have been putting out collaborative efforts at a steady pace since 2006’s debut The Exchange Session Vol. 1. Their fourth record, NYC, is the duo’s best yet, drawing inspiration from the Big Apple and combining Hebden’s intoxicating soundscapes and deep beats with Reid’s expressive, original drumming style.

Who? Together Hebden and Reid — who met through a mutual friend at renowned French record store the Paris Jazz Corner — have put out four records in the last three years (2006’s The Exchange Session Vols. 1 and 2, 2007’s Tongues, and NYC). And separately, both artists have maintained impressive bodies of work.Besides putting in time as a multi-instrumentalist in the oft-dormant, underappreciated post-rock group Fridge, Hebden has released a series of impressive electronic records under the moniker Four Tet — including this year’s Ringer. Reid, who grew up in New York a few blocks from John Coltrane and whose career as a musician surpasses the 50-year mark, has played with some of music’s greatest artists, including Miles Davis, Fela Kuti, Sun Ra, and James Brown. He’s led various groups — notably, the Steve Reid Ensemble, who are responsible for this year’s Daxaar — and worked under the direction of music business impresario Quincy Jones.

Fun Fact: Although Reid’s collaborative resume is more than impressive, the jazz luminary claims that in working with Hebden, he has found his true “musical soul mate.” Awww!

Listen to Four Tet and Steve Reid’s ‘Strings of Life’