Exclusive MP3: Another Scandinavian band with a penchant for opulent '70s rock might sound cliché -- except when it's this good. 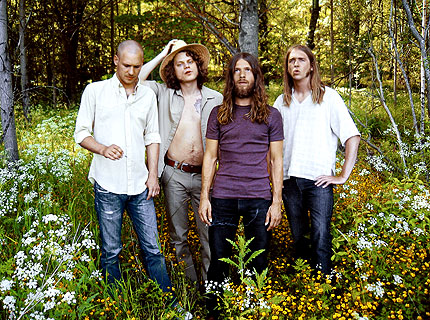 Are Swedish mothers mixing magic mushrooms with their meatballs? Is Volvo lacquering shift knobs with LSD? It’s not easy to decipher exactly why Sweden produces so many psychedelic-leaning rock bands, or why such a large number of them — Dungen, the Soundtrack of Our Lives, and Mando Diao — are really quite good. When the advance copy of Dead Man’s Euphoria arrived in our mailbox this week, we decided to stop trying to answer these “why” questions and instead followed the wisdom of one Steve Miller: “Turn it up.”

Hailing from Orebro, a city of 100,000 that lies about two hours west of Stockholm, Dead Man favor Led Zeppelin’s mystical/acoustic era, but there’s also a tinge of sun-drenched hippie folk that will surely set Deadheads a-noodlin’. And when we discovered a track called “The Wheel” that clocks in at over nine minutes, we just knew it was going to be good. Download it here, and experience a superior stoner jam that’s only briefly interrupted by the vibrato vocals of Kristoffer Sjödahl (imagine if Jefferson Airplane’s Grace Slick actually was a dude, instead of just sounding like one) before drifting off into some epic drum fills, a few tasty solos, and a bit of flute. Yes, flute! At least we think we heard it!

Euphoria arrives Jan. 27, and Dead Man will tour the U.S. in February.