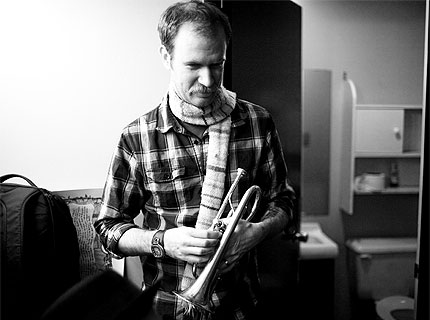 In the music world, the term “experimental” is used loosely; it’s often applied to anything outside of traditional drums, bass, and guitar. But the Happiness Project, Broken Social Scene, and Do Make Say Think musician Charles Spearin’s new endeavor, just may restore the term’s clout.

Over the past few years, Spearin has collected recordings of interviews with his Toronto neighbors on the subject of happiness. After close examination, he discovered that each speaking voice carried a natural melody and rhythm. So he overlaid the interviews with an array of instrumentation — from saxophone to glockenspiel, guitar, and drums — for The Happiness Project, recorded with collaborator Ohad Benchetrit, along with BSS co-founder Kevin Drew and contributing members Evan Cranley (Stars) and Julie Penner (Do Make Say Think).

“Normally, we don’t pay any attention to the movement of our lips and tongue, and the rising and falling of our voices as we toss our thoughts back and forth to each other,” Spearin says. “The only time we pay attention to these qualities is in song.”

Spearin unveiled a song or two from the project this year on Broken Social Scene’s U.S. tour. But below you can download “Anna,” the first official studio leak. “All of the melodies on this album are the melodies of every day life,” Spearin says. The album is out Feb. 10, via Arts & Crafts.