Even the New York Police Department couldn't stop the band from performing for their fans -- and showing off baby pictures! 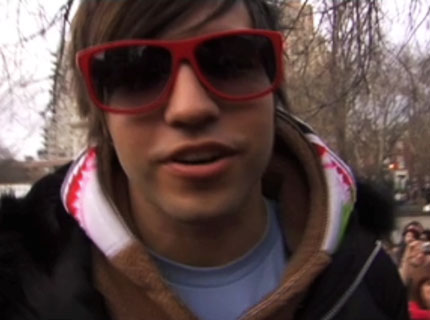 Fall Out Boy fought the law in New York’s Washington Square Park on Monday afternoon, and the law won, mostly.

After tipping off fans via their official site, the band headed to the landmark Greenwich Village gathering place, acoustic guitars in tow, for a special pop-up gig just hours before their new album, Folie a Deux, went on sale. Unfortunately for FOB and their fans, the NYPD also got the heads-up, and greeted the band with bad news: Without a permit, they wouldn’t be allowed to play.

But that didn’t stop Patrick Stump, Pete Wentz & Co. from performing for the crowd.

Watch our exclusive video, provided by Fall Out Boy themselves, and see the guys confronting the police. Then enjoy Stump leading everyone in an impromptu sing-along of “Grand Theft Autumn/Where Is Your Boy Tonight?” from the band’s debut full-length, Take This to Your Grave. Oh, and at the 6:00 mark, Pete shows off Blackberry pix of his newborn son.