With help from Spoon and Louis XIV, a former radio DJ finds her inner rock chick. 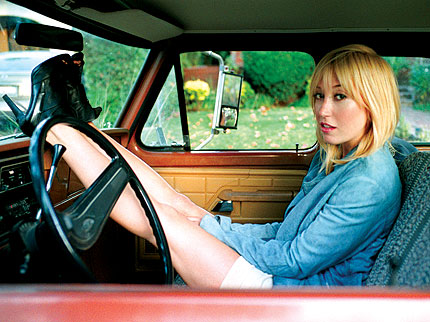 Before she moved to Los Angeles to concentrate on her career as a musician, Anya Marina spent her days spinning other people’s records — lots of ‘em — at a series of San Diego radio stations. So it’s probably safe to assume that she knows what she’s talking about when she says she hates singer-songwriter music. “I’m just over it,” she admits, sipping green tea at a sushi place near her home in L.A. “I mean, I wanna light the crowd’s asses on fire. How can you do that when you’re sitting on a stool strumming a guitar?”

Marina is well acquainted with the challenge: In 2005 she put out a — shudder — singer-songwriter album called Miss Halfway; it didn’t sell well, but it did attract the interest of music supervisor Alexandra Patsavas, who licensed the title track for Grey’s Anatomy and signed Marina to her Atlantic affiliate, Chop Shop Records. Determined to boost the ass-lighting level for Halfway’s follow-up, Marina recruited Brian Karscig of louche San Diego rockers Louis XIV to produce. “She wanted to make something edgier,” says Karscig. “So she played me some songs, and then I asked her which was her least favorite. We started with that one, and it took on a whole new life.”

The result of their efforts, Slow & Steady Seduction: Phase II (which also features a pair of tunes produced by Marina friend and Spoon frontman Britt Daniel), is definitely not of the stool-sitting persuasion. In the garage-glam jam “Afterparty at Jimmy’s,” she pokes fun at a scenester’s shameless self-promotion (his band is “three parts Kinks, one part the Jam”), while “All the Same to Me” layers chamber-goth harmonies over a soul-funk groove. Marina — whose voice has a breathy, Cyndi Lauper–like warble — says she hopes Seduction’s variety will rope in an audience more eclectic than the average coffee-shop crooner’s. “College students, hipsters, suburban moms — come to the party and you won’t be excluded,” she promises. “Just maybe don’t bring all five of your kids, since then I can’t do my monologue about how this date went wrong the other night and why he was a bad kisser.”