Album of the Year: TV on the Radio

It was the best of times and the worst of times for these anxious, angry, skeptical, visionary young men. Here's how the apocalyptic Dear Science helped turn TV on the Radio into one of the world's greatest bands. 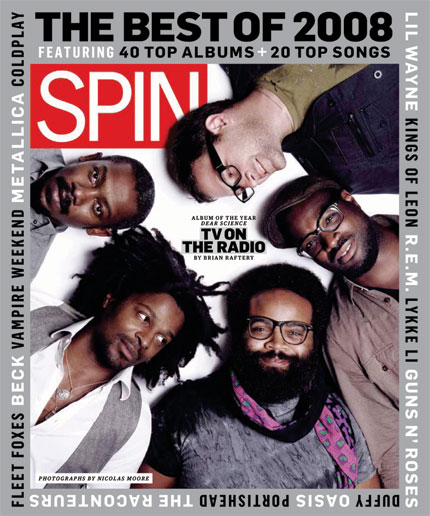 It’s a Tuesday afternoon at Minneapolis’ First Avenue nightclub, and three members of TV on the Radio — guitarist and producer Dave Sitek, drummer Jaleel Bunton, and bassist-keyboardist Gerard Smith — are beginning their soundcheck with an offering to the local deity: Prince. This is where Purple Rain was filmed, and as Sitek strums the title track, Bunton propels himself across the stage with the same glute-shaking strut perfected by the Purple One nearly 25 years ago. This is followed by a few Morris Day vamps and an a cappella “Little Red Corvette.” If Prince were to suddenly ride in atop a velour-covered, minotaur-driven sleigh, he’d either beam with pride or sue.

In just a few hours, the full lineup of TV on the Radio, including time-sharing vocalists Tunde Adebimpe and Kyp Malone, will play a 90-minute set that draws heavily from the band’s recent album, Dear Science (“Purple Rain,” alas, was only for the warm-up). The group’s earliest shows were famously untidy, but tonight’s performance is tight and aerobic: Adebimpe’s arms windmill erratically and Malone leaps acrobatically mid-solo. Perhaps because the show is all-ages, the crowd is especially reactive, pogoing in appreciation.

“Thanks for dancing,” Adebimpe says halfway through. “That’s encouraging for the future of the world.”

Listen to Dear Science and you’ll realize he’s only half kidding. The follow-up to 2006’s bleak, beautiful Return to Cookie Mountain, it’s full of wondrous pop experiments like opening romp “Halfway Home,” which buries a bubblegum ba-ba-ba refrain under a thick coat of synths and guitars. Such moments are part of the reason Dear Science is SPIN’s Album of the Year — the second such accolade for TVOTR in three years. Parse the lyrics, and the phrase “album of the year” reveals a double meaning. For Dear Science is a document of the absurd, oft-contradictory realities that have governed American lives over the past 12 months, during which waxing anxiety was offset by irrational optimism.

Consider the first two singles, “Dancing Choose” and “Golden Age.” One depicts an overstuffed, senses-dulling culture that leaves its victims with “a palette blown to monochrome”; the other is a lush disco anthem — part Off the Wall, part Wall of Sound-that promises better times ahead: “There’s a golden age comin’ round.” It’s a jolting dichotomy, but an accurate one. Dear Science suggests that, even if the end seems nigh, we all need to keep smiling through the apocalypse.

“I’ve known people who’ve lived in the worst conditions someone could live in, and yet they were the most optimistic people,” says Adebimpe, 33. “They had a genuine faith they were going to make it through the day and found small moments that were joyful and enormous to them.”

He says this with the wry resignation common to all five band members, who are just as frustrated and weirded out as everyone else, and whose deadpan humor doesn’t always come across in print. Witness the following exchange, which you’ll have to trust was much funnier in person — and not just because the end of civilization was contemplated in the ornate, vaguely space-age bar of a Minneapolis luxury hotel.

MALONE: We were all raised during the Cold War to believe the bomb was gonna fucking fall on us. It wears out your panic button.

SMITH: During Y2K, I was living with my mom, and she was like, “Do you know how many times the world’s been supposed to end since I was born?”

SITEK: We all saw [the 1983 post-nuke movie] The Day After. I remember my guidance counselor talking to me about the future, and him arguing with me about making plans for the future and acting responsibly. I’m like, “All I hear is death, death, death, death, death. I’m not even going to make it to 18, so I’m not gonna waste any time thinking about it.”

MALONE: I dunno. Life has proven to be a lot longer than I anticipated.