Will the hard-rocking frontman tell all? SPIN.com digs up a few famous quotes. 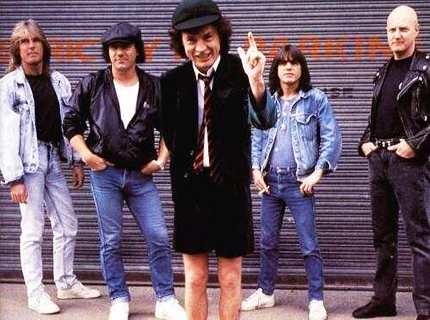 AC/DC had a great year. There was a best-selling album, a sold-out concert tour, and now lead singer Brian Johnson is preparing to write his memoirs.

Johnson recently signed a book deal with Penguin Books. But for fans who can’t wait to read his words, here’s a look at some notable past quotes from the outspoken AC/DC singer:

The meaning behind “Have A Drink On Me” is pretty obvious. “When I first joined the band, I came from Newcastle, and we are big drinkers up there…. First thing I said to the lads [was] ‘Come on, have a drink on me’…. It’s just my philosophy, if I meet new people, it always seems to be the best way to meet new people…It just breaks barriers, anywhere on the world.” [Via No Nonsense]

Black Ice featured some unconventional recording methods: “The day I came into the studio, [producer Brendan O’Brien] took me to the little office behind the receptionist, and there was a small mixing board, a microphone with a board attached to the bottom, and he told me to sing…He played a backing track, and I just started belting out the songs.We scared the [stuffing] out of the receptionist.” [Via USA Weekend]

Yes, there’s a reason why he wears that hat: “I started wearing a hat when I was in my first professional band, Geordie.Whenever I perform, I never stand still, and the sweat always was pouring into my eyes.One night, my brother came to a gig, and he had one of those race caps with a short brim.He told me to try it out and maybe it would keep the sweat out of my eyes.I put it on and went out onstage.Remarkably, my eyes stayed dry, so I kept wearing a hat.” [Via USA Weekend]

Brian thinks that Chuck Berry is, uh, a piece of shit:“[Chuck Berry] was the biggest piece of shit I’ve ever met in my life– the rudest man I’ve ever met. He told us he signed one autograph a day and he’d already signed it. I don’t wanna be an asshole like he was.” [Via Caustic Truths]