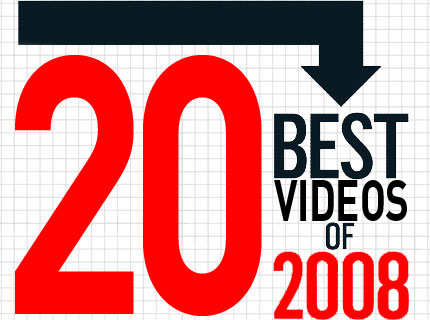 20. Stars, “Bitches In Tokyo”
One problem with the popularity of indie rock is the lack of idolatry. Sure, it’s great that a musician can be just like you, glasses and all, but what happened to the desperate adolescent joy of wanting to be a rockstar? [Directed by: Experimental Parachute Movement]

19. Vampire Weekend, “Cape Cod Kwassa Kwassa”
Filmic proof that nobody does insufferable ’80s preppy better than a bunch of insufferable preppies. I’ve got to say, I was just as satisfied as gothic Molly Ringwald to see them get their Cure on. [Directed by:Richard Ayoade]

18. Omaha Bitch, “Orgasmic Troopers”
Headbanging ballet dancers throwing punches. It’s so hysterically metal that the only question is how the Metalocalypse writers didn’t think of it first. [Directed by: Ces Messieurs]

17. Bert and Ernie, “Ante Up”
The next time you’re at a hip hop show and the MC tells you to “Bounce! Bounce!” think about how much better Bert and Ernie are at it. [YouTube user Stianhafstad]

16. Bowerbirds, “In Our Talons”
This video makes me sad to be a human being in the post-industrial age. Because as long as human beings have power over nature, nature is doomed. And nothing is more crushing than watching a doomed creature dance. [Directed by: Alan Poon]

15. Feist, “I Feel It All”
You’d feel it all too if you had the power to set off fireworks with the wave of a big stick. And the power to do it all in a single take. [Directed by: Patrick Daughters]

14. Yeasayer, “Wait for the Summer”
In Yeasayer’s nu-hippie clap-land universe, the seasons ebb and flow with the life cycle of an apple, as illustrated in this gorgeous animation. [Directed by: Mixtape Club]

13. Utah Saints, “Somethin Good ’08”
What if you were there that night in 1989 when the running man dance debuted in a tiny nightclub? And what if it wasn’t MC Hammer doing the dancing? [Directed by: Eran Creevy]

12. Terry Lynn, “The System”
Sometimes really brutal imagery is necessary to express pure rage at unforgivable social injustices. Leave it to Lynn to lyrically elaborate. [Directed by: The Rickards Brothers]

11. Thunderheist, “Jerk It”
Jerk it means dance in the exact same way that grabbing a cock means having to hold a flapping bird at arm’s length. [Directed by: That Go]

10. Devendra Banhart, “Carmensita”
They don’t have each other anymore, but Devendra and Natalie Portman will always have this comical tribute to badly translated early Bollywood films. [Directed by: Skinny]

9. Beyonce, “Single Ladies”
It’s ok to rip off Fosse. Everybody rips off Fosse. You know why? Because nothing in the whole world is sassier. [Directed by: Jake Nava]

8. Le Le, “Breakfast”
This animation by Piet Parra — a member of Le Le himself — balances lascivious and absurdly literal imagery in a way that, like the song, makes me both sort of uncomfortable and totally amused. [Parra]

7. The Chemical Brothers, “Midnight Madness”
The best thing about this glittery goblin parkour breakdance (just watch it) is knowing that parts of it can’t possibly be real, but not always knowing which parts those are. [Directed by: Dom & Nic]

6. MGMT, “Time To Pretend”
Since drugs are such an essential part of the history and myth of MGMT, it’s only right that their video be an unambiguous and visually astonishing ode to figuring out life problems by getting some friends around a bonfire and dropping acid. [Directed by: Ray Tintori]

5. Radiohead, “House of Cards”
Radiohead have a habit of producing high-concept, technologically impressive, rather boring videos. Luckily, the incredible laser animation of this one results in something almost as pleasing to watch as it is mind-bending to think about. [Directed by: James Frost]

4. Weezer, “Pork and Beans”
Even if you don’t love his music these days, you’ve got to envy Rivers Cuomo. There may not be anyone else who’s famous enough — and nerdy enough — to recreate all of the past few years’ biggest YouTube hits in one epic, hilarious music video. [Directed by: Mathew Cullen]

3. Gnarls Barkley, “Going On”
I know “Who’s Gonna Save My Soul” was supposed to be Gnarls’ best video from The Odd Couple (special achievement medal to them this year, they were all great), but I just can’t get the cryptic last few seconds of this Jamaican odyssey out of my mind. [Directed by: Wendy Morgan]

1. Bjork, “Wanderlust”
The young directing duo Encyclopedia Pictura spent a year (much of it unpaid) completing this breathtaking allegorical struggle of wonder against worry. Everything (excluding the CG water) is handmade, from the yak puppets to the carved landscapes to the terrifying cartoonish deity. The full 3D version (!!!) is viewable at Encyclopedia Pictura.