Click here to listen to the Radiohead frontman's remix of "Harrowdown Hill." 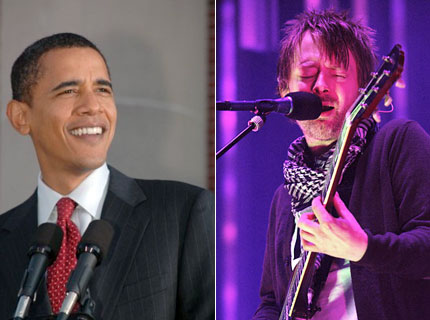 Pleased by the hopeful political promise of Barack Obama’s Presidential victory, Radiohead frontman Thom Yorke has offered a new remix of “Harrowdown Hill” — a song off his 2006 solo record The Eraser — via the band’s official website. (To hear the track, click on the file in the November 5 blog post.)

Along with the free track, Yorke offered his own commentary on the week’s events, and revealed that there’s a birthday boy in the Radiohead camp.

in celebration of nov 5th
jonnys burthday
amid bonfire and fireworks in the UK
and the dawn of a new era in politics in the USA
I humbly donate a remix of harrowdown hill that was finished ages ago during the band webcasts, a small reminder of the dark days of Bush’s…

Hey, happy (belated) birthday to guitarist Jonny Greenwood! You might want to check on that spelling of ‘birthday’ though, Thom — although we’re pretty sure this guy wouldn’t mind.