Road-tested country punks start yet another rousing barroom brawl with the hook-laden Get It Together! 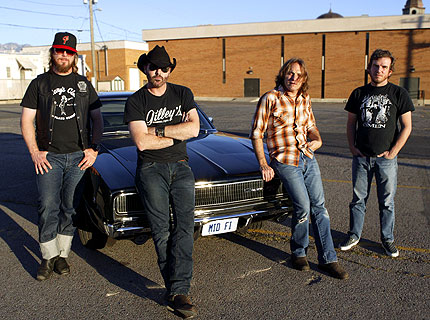 Who? For more than 20 years, Eddie Spaghetti, the Supersuckers’ ass-kickin’, name-takin’, bass-pluckin’ frontman, has produced the kind of blue chip rock’n’roll that makes dive bars so great: Loud, vice-ridden rock songs with country flavor and plenty of tongue-in-cheek humor. In other words, the soundtrack for one hell of a good time. And the band’s latest album, Get It Together!, is yet another classic with skuzzy anthems (“I’m A Fucking Genius,” “I Like It All, Man”) and stunning four-chord rousers (“When I Go, I’m Gone”). But the surprise here? The album’s ballads of love and loss are especially strong, notably “She Is Leaving” and “Breaking Honey’s Heart.”

Who? Formed at Tucson, AZ’s Santa Rita High in 1988, the Supersuckers (then known as the Black Supersuckers) quickly climbed the local club scene before deciding to try the larger pond of Seattle. The band signed to Sub Pop in 1992 and issued their debut album, The Smoke of Hell, later that year. Relentless touring followed, as did an immersion in country music with 1997’s Must’ve Been High, which featured a guest appearance by Willie Nelson. Ten albums, a 27-track Sub Pop retrospective, and an ill-fated major label deal (the band subsequently formed their own Mid-Fi label in 2002) later, the self-proclaimed “greatest rock’n’roll band in the world” still boasts three original members from Santa Rita — Spaghetti, guitarist Ronald “Rontrose” Heathman, and guitarist Dan “Thunder” Bolton. Kinda makes you wish you’d kept up with those bass lessons, huh?

Watch: Supersuckers, “What It Takes”