Nikolai Fraiture explains "Providence, RI," an acoustic ditty off his debut solo album The Time Of The Assassins. 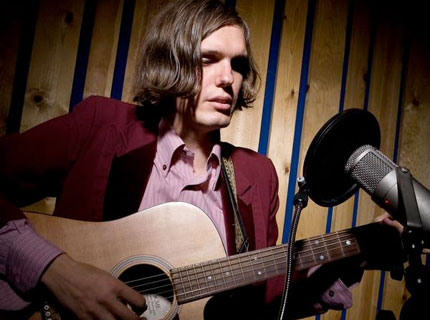 As the bassist for New York rockers the Strokes, Nikolai Fraiture appears to be the strong, silent type, standing solemnly behind his bandmates as he lays down deep-toned riffs. But for his solo project, Nickel Eye (a variation on his given name), Fraiture strapped on a six-string guitar and stepped up to the mic.

Nickel Eye’s debut album, The Time Of The Assassins, out January 27 via Rykodisc, is a “pretty stripped down” collection of guitar, bass, drums, and a touch of mellotron. And its standout track, “Providence, RI,” sees Fraiture’s songwriting chops surface as he recalls childhood memories to a head-bobbing melody.

“Years and years ago, my grandfather bought a place in the middle of the woods [in Rhode Island] and every now and then we’d go and visit him up there,” he tells SPIN.com. “It was the kind of place where you turn your headlights off and it’s pitch black.”

Beginning with Fraiture “just noodling on the guitar,” both the song and the entire Nickel Eye project developed during downtime with the Strokes — what he calls his “day job” — and evolved “little by little.” “For me, it was a mental break from the everyday,” he says. “When we got time off from the Strokes, I had all these words and started playing around with them and with different parts of music that I had.”

From there, Fraiture recruited members of Brit rock band South and recorded the album in London and New York — and tapped Yeah Yeah Yeahs guitarist Nick Zinner and Regina Spektor for contributions.

Though fans can expect at least two more albums from Nickel Eye in the future (he signed a three-record deal), Fraiture doesn’t plan to stay away from his “day job” too long: “We are going to get back together in February,” he says of the Strokes. “Everyone in the band is eager to get back!”