January 20, 2009. Our 44th Commander in Chief spends his first night in the White House. Flush from victory and aglow with anticipation, he needs a proper musical backdrop to set the mood. Holding a cup of jasmine green tea, President Barack Obama strides across the eagle on the Oval Office rug, gazes pensively out the window, and considers the nation now under his charge. Or… cracking open a Coors Light, President John McCain sits down at the mighty desk, puts his feet up, and feels his eyelids growing heavy. Then, McCain/Obama walks over to the presidential stereo system, scans through the Executive iPod, and calls up a playlist specially created for this moment.

Read their playlists below — and listen to some of the songs:

McCain’s playlist: “I Am the Champion”

Obama’s playlist: “What Barack is Cookin'” 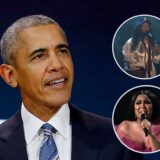