It was an emotional week: Jay-Z, Obama, Paramore, and more spread the love, while the Sex Pistols and Bloc Party drank the hater-ade. Click here for these stories and more! 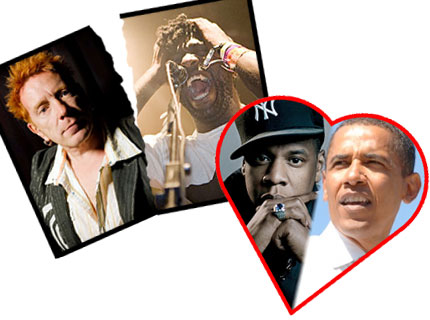 It was a baffling week, one filled with plenty of love and hate. For a little help understanding we turned to the stars.

Sure, Jay-Z (Sagittarius) and President-Elect Barack Obama (Leo) bonded over a new The Blueprint 3 track, which is characteristic for the two signs.

But there were plenty perplexing contradictions: Paramore’s Hayley Williams (Capricorn) professed her undying love for Twilight character Edward (Gemini) — but a quick look to the stars suggests Hayley might want to steer clear of those fangs.

Okay, so maybe we’re not so good at this astrology thing — but we still have the week’s top stories, video and MP3 goodies, and reviews. Check ‘em out below.

PLUS: The best of last week.