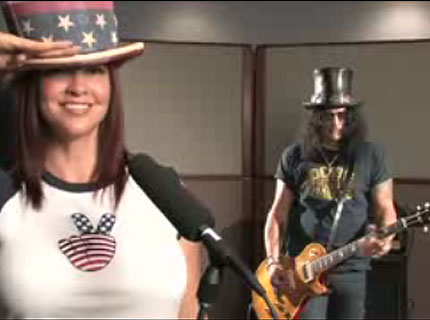 Slash and his wife Perla Hudson have collaborated on a new video to express their support for same-sex marriage and urge people to continue to protest Proposition 8, the California initiative banning gay marriage, which passed in the November 4 election [via NME.com].

“I married my sweetheart,” Hudson says on the video clip, pausing to give an emphatic “that’s him!” nod toward Slash, who plays the “Star-Spangled Banner” on guitar in the background. “You should be able to marry yours too. Say no to hate and yes to equal rights. Keep up the fight.”