Slash Collaborates with Ozzy and Fergie on New Album

Plus: The axeman's wife spills the beans on his reaction to Chinese Democracy. 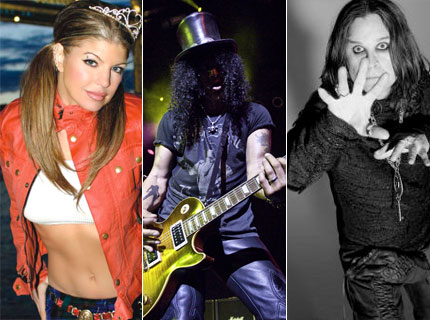 Is it just us, or is Slash’s missus suddenly the chattiest person in the music biz next to Kanye West?

After serving as the mouthpiece for the pro-gay marriage video she made with Slash, it seems Perla Hudson is now working as her hubby’s publicist, leaking the names of collaborators featured on the guitarist’s new solo album.

While Slash has been tight-lipped about who would make appearances on the record, expected to be released in 2009, his better half was only too happy to tell celeb site Rockerazzi: “It’s going to be Slash and friends, with everyone from Ozzy (Osbourne) to Fergie.” [Via gigwise.com].

She also dished about the family’s official review of Chinese Democracy: ?”[Slash] feels great about it. It’s long-awaited…. Our kids like it but they also like Elmo, so that goes without saying.”

Perla, we think you might have your Muppets confused. Don’t you mean Beaker?