How greenbacks and red tape are tearing the heart out of hip-hop. 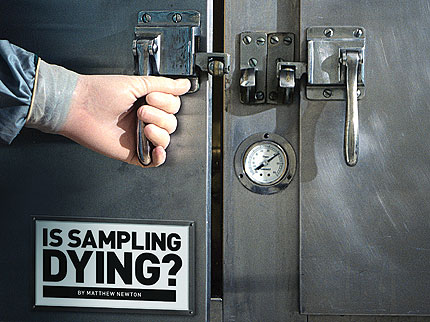 Simple beats and Auto-Tuned vocals form the foundation of 808s & Heartbreak, Kanye West’s latest release. As the title implies, it’s a breakup album. But perhaps the split is deeper than even West realizes. His new sound is a bold departure from his previous efforts, but also a challenge to the parameters of what many listeners would consider hip-hop. 808s & Heartbreak doesn’t rely on an element once pervasive in the genre: samples. The album doesn’t contain any prominent samples, while West’s previous release, Graduation, featured them on 10 of its 13 tracks. He is not alone in this change: Young Jeezy’s last album, The Recession, boasts just three samples, and T.I.’s latest, Paper Trail, features only four.

The staple of hip-hop’s beatmakers for nearly 30 years, sample-based production has slowly eroded over the past decade, due to rising costs and rampant litigation. Today the average base price to clear a sample is $10,000, and the threat of lawsuits over copyright infringement looms heavy over artists and labels. High-profile rappers have become legal targets for music publishing companies, while independent MCs struggle to compete. With no standardized pricing, the prohibitive cost of samples has altered the creative approach of many hip-hop producers. The trend toward purely electronic production — synthesizers, drum machines, Auto-Tune — has injected major stylistic changes into the genre, with producers like the Neptunes, Timbaland, and T-Pain at the forefront.

“The art form of hip-hop — the sound that attracted us to it — is diminishing,” says RZA, Wu-Tang Clan producer and MC. “It’s becoming just another form of pop music.”

Up until the early ’90s, artists sampled liberally from other musicians. But a case brought against Biz Markie in 1991 changed the rules of hip-hop and sample-based music as a whole. That year, the rapper appeared in a U.S. District Court in New York accused of copyright infringement for sampling portions of a 1972 Gilbert O’Sullivan song, “Alone Again (Naturally),” for a track on his album I Need a Haircut. Though he initially sought permission to use O’Sullivan’s original composition, Markie never received it and included the sample anyway. The rapper’s actions incited a stern response from presiding Judge Kevin Thomas Duffy.

“‘Thou shalt not steal’ has been an admonition followed since the dawn of civilization,” Duffy told Markie. He then issued an injunction against Cold Chillin’/Warner Bros. Records for the distribution of the album and song. “People talk about the Biz case as a turning point,” says Hope Carr, president of Clearance 13′-8″, an agency specializing in sample clearance and risk assessment. “It was enormously frustrating, because the decision didn’t really decide any actual law; the only citation was the Bible. But it certainly got a lot of people’s attention.”

Clearance agencies like Carr’s began sprouting up in the early ’90s to facilitate the proper licensing of samples and broker deals on a case-by-case basis. While there is no set formula, the length and prominence of a sample plays a major role in determining price. It also matters who is being sampled (e.g., Barry White is expensive; Stax Records artists like Wilson Pickett are more reasonable). One response to rising prices has been the increased use of interpolation, the practice of having a musician rerecord a sample to help reduce costs.

“Take the temperature of mainstream hip-hop and it’s obvious that sampling just isn’t a large part of it anymore,” says indie rapper El-P, also label chief at Definitive Jux. “And the people that do sample [are the ones who] can afford to.” The practice is, in many ways, a millionaire’s game, populated by artists like Jay-Z or (until recently) West, who can pay to play — and who can lean on fame as a bargaining chip. “When [Kanye] sampled Ray Charles for ‘Gold Digger,’ everybody was like, ‘It’s not going to get cleared,’ ” says A-Trak, West’s former DJ. “But then he called whoever’s in charge of [Charles’] estate, and it eventually got cleared.”

“In the old days, samples were $2,500 or $1,500,” says RZA. “I paid $2,000 for a Gladys Knight sample for ‘Can It Be All So Simple’ off Enter the Wu-Tang (36 Chambers). That was a big intro, and the hook was repetitious. Something like that nowadays would cost $10,000.” The problem, RZA says, is that high prices are discouraging producers like him from using samples, which in turn impacts all parties’ ability to make money.

“For Gladys Knight, even though [that sample] only cost $2,000, that was an advance,” he says. “Enter the Wu-Tang went on to sell millions of copies. She probably made about $50,000 [from publishing]. The master owner probably made a good amount of money, too.”

A sample must be cleared with two camps: those who own the master recording (typically the record company that released the song or whoever purchased the catalog) and those who own the publishing rights (usually the songwriter). “Generally, one side is going to cost about as much as the other,” says Eothen Alapatt, general manager at Stones Throw Records. Sampling a major artist like James Brown would cost about $20,000 — $10,000 for the master recording side and $10,000 for the publishing — a figure that rivals the entire budget for an album released on Stones Throw. But to not clear the samples on an album poses a high risk. Though he wouldn’t get specific, Alapatt says that Stones Throw has paid $25,000 to $35,000 to have samples cleared after the release of an album.

For a time, many producers believed that obscure artists — one-hit wonders and lesser-known jazz and soul musicians — were the gateway to cheaper samples. But as Alapatt explains, that wasn’t to be. “That was false hope in a lot of ways, because you’d be surprised who’s out there Googling themselves,” he says. “People are using the Internet to search out information that my generation thought was only possible through a secret handshake.”

Countless lawsuits over the past ten years have proven that music catalogs’ owners spend substantial resources researching and litigating against unauthorized use of their music — a process sometimes referred to as “trolling” or “sample chasing.” Bridgeport Music, a publishing company that owns the rights to the music of such groups as Parliament/ Funkadelic and the Ohio Players, has filed hundreds of copyright infringement suits. While about half of these cases were either dismissed or settled, Bridgeport scored two important victories in the past few years. In a 2004 case that focused on N.W.A’s use of a Parliament guitar sample, a judge mandated that the use of any unauthorized sample, no matter how obscured the source material, can be considered copyright infringement. And in 2006, Bridgeport and Westbound Records won $4.2 million in damages after a court ruled to stop all sales of Notorious B.I.G.’s Ready to Die album because it contained an unauthorized sample of the Ohio Players’ “Singing in the Morning.”

Some majors do appear to be embracing unauthorized sampling. Take Gregg Gillis (a.k.a. Girl Talk), whose latest album, Feed the animals, contains more than 300 uncleared samples. “We’ve had no issues on a copyright level so far,” says Gillis, who began selling his album in June as a pay-what-you-wish download. “People from major labels have been interested in having me collaborate [on remixes]. I think they’re starting to realize, ‘Why fight when we can work with it and make something cool?’ ”

RZA believes sampling needs to be regulated, starting with standardized fees and government oversight. Producers often have to give 50 to 100 percent of any publishing revenue to the original artist they’re sampling. RZA would like to see a new system where the publishing is equally split between the new producer and original artist, and in which session players from the initial recording even get paid again. “All this publishing was taken away from the artists,” he says, “and that kind of raped the hip- hop industry.” But not everyone in the industry shares his opinion.

“Not all samples are equal,” says Monica Corton, a vice president at Next Decade Entertainment. Corton, whose company represents catalogs from soul and R&B artists like Millie Jackson and Joe Simon, has licensed samples to Young Jeezy, Redman, and Pharoahe Monch. “Some people put the sampled work so out front that it dominates the song,” she says, “while others use a small portion that is not as evident.”

But according to Carr, dwindling profits across the industry have label executives searching for ways to maximize existing revenue sources. “Some of the majors have realized if they want to collect money on smaller things, they need to quote smaller figures [for samples],” she says. Lots of artists want to be honest about what they’re sampling, “but they can’t afford it.”

But until some sort of universal decision is made, more and more hip-hop artists will likely go the Kanye route and continue to blur the lines of traditional hip-hop by relying on electronic production. “Right now, without sampling in hip-hop,” RZA says, “it’s really a soggy-ass form of music.”