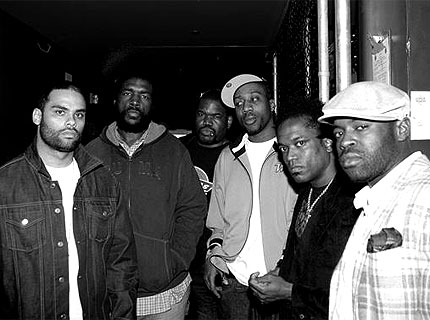 Get ready, Paul Shaffer, you’re going to have a little competition: Drummer extraordinaire ?uestlove, whose band the Roots are allegedly set to act as the house band for NBC’s Late Night when Jimmy Fallon takes over for Conan O’Brien in 2009.

In a video interview that surfaced online over the weekend, ?uestlove listed many reasons for his band’s decision to put their touring schedule on hold for the gig. [Via MTV.com].

Among those reasons: his love life. “Ain’t no [woman] taking a man serious who is in his own home for only three months out the year,” he said. “I been in my crib since 2006 and I still ain’t unpacked everything yet.”

The video interview has since been removed, but according to a transcript that was reportedly lifted from the Roots’ official site, ?uestlove went on to enthuse about the Late Night slot: “I’mma love my new home at 30 Rock [NBC’s headquarters],” he said. “Two visits and I’m already on a first-name basis with the SNL cats.”

NBC has not confirmed the Roots’ inclusion in the show, but a rep from the group’s label Island Def Jam reportedly confirmed the gig to the Philadelphia Daily News.

Hooray, more reason to stay up past our bedtime!