"Pack up the babies and get a bunch of nannies," says Gwen Stefani about the band hitting the road in the new year. Read more here. 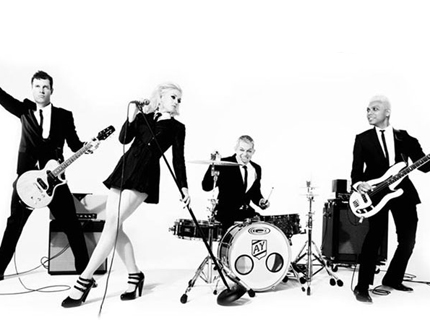 After a lengthy hiatus — and, you know, a few solo albums and a new baby from frontwoman Gwen Stefani — Anaheim, CA, rock and ska quartet No Doubt will return in 2009 with a new album and supporting tour, beginning with a just-announced headlining performance at East Rutherford, NJ’s Bamboozle Festival May 2-3. “It’s time for some rock’n’roll,” bassist Tony Kanal wrote to the band’s official website. [Via MTV.com]

“Pack up the babies and get a bunch of nannies,” Stefani added “[It] would be so inspiring to get out there and play all those songs again.” Dates for the complete tour — the band’s first since 2004 — have yet-to-be announced, but tickets for the Bamboozle performance (the fest also features a headlining show from Fall Out Boy) go on sale November 28 at 10 A.M. via thebamboozle.com.

As for the new album: “If we go on tour, it will inspire us to write,” Stefani wrote. “I need to see the fans out there.” Guitarist Tom Dumont agrees and thinks the band could write the follow-up to 2001’s Rock Steady while on the road. And Kanal is certainly on board as well. “I think playing some shows will make the studio time even better,” the bassist wrote. “Playing shows, writing songs, kicking ass, ND 2009.”