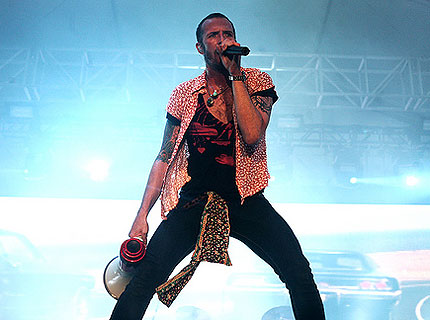 Reunited alt-rockers Stone Temple pilots have indeed written new material. Its release however, is questionable — and it’s not due to Scott Weiland’s oft-troublesome lifestyle. Thank Atlantic Records, which is suing Weiland and drummer Eric Kretz for breach of contract.

“It’s pretty fucked up, actually,” Weiland told MTV News. “I don’t know who we would record for. I’m not into recording for Atlantic Records, and there are some legal issues there. Originally, I was told — and I was told for years — that we were free from Atlantic.”

The suit filed against the two claims they’ve threatened to stop performing, and also states the label wants the band to deliver two more albums.

“I know [the STP] guys have been writing, and there’s been some really cool stuff that’s come from that,” Weiland explained. “But I have no interest in making a record for a major label. If we were going to make a record, I would want to do it in a way that was much more original and in a more creative fashion.”

Meanwhile, Weiland is enjoying life as a solo artists and anticipating the release of Happy in Galoshes, his new album due November 25 (listen to a song here!). “When I look at people like Beck and even, unfortunately, Elliott Smith, who was one of my favorite singer/songwriters, the ability to do what you want to do at your own pace is appealing to me.”

Unappealing, however, is Velvet Revolver: “There were too many big egos in the band — and I’m including myself,” he said of his ousting from the band.

While fans await word from the courtroom, Weiland will hit the road this winter behind Galoshes. Click here for the full itinerary.