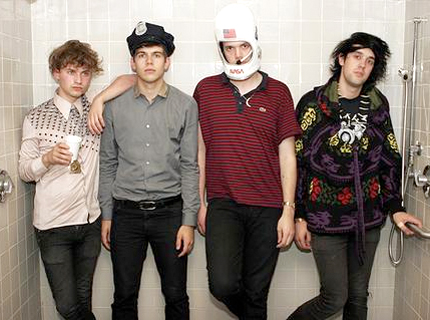 After a two-year absence — and a little love makin’ with CSS’ Love Foxxx — guitarist Simon Taylor and his Brit electro jesters the Klaxons will return with a new album in early 2009.

The record is the follow-up to 2007’s breakout debut Myths of the Near Future, which the band hopes to finish recording before Christmas with the help of Simian Mobile Disco’s James Ford on production duties.

The Klaxons have been playing new material on the road of late, including album cuts “Moonhead” and “Valley Of The Calm Trees.” But according to vocalist Simon Reynolds, fans shouldn’t jump to conclusions on the forthcoming record’s sound. “By no means are those songs any indication of which way the album’s going,” he told NME.com. “[The album] sounds intricate at the moment… half of it sounds like you’re holding on for dear life — intense and nervous — and the other half sounds like when you don’t care and you float off.”

To catch the band’s new bi-polar “prog doom” vibe live, you just need a little patience: “[After we finish the album] we’ll play every festival possible and go around the world twice!”

Klaxons, “Valley of the Calm Trees”