Click here for details on the guitarist's side-project Leathermouth and its influences, both named (horror movies!) and unnamed (Snoop?). 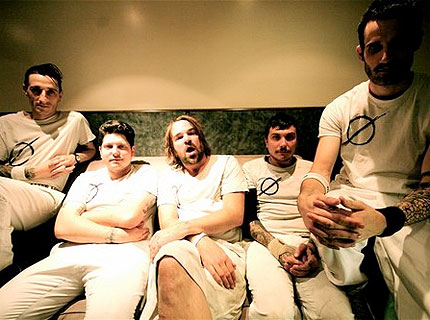 While My Chemical Romance vocalist Gerard Way focuses on his comic books, guitarist Frank Iero has taken up a new project of his own: “Dirty rock’n’roll” band Leathermouth. [Via MTV.com]

The group, formed with a few like-minded pals, sees Iero take on a new role: Frontman.

Stepping in for the vocalist originally slated for the band, who “never wrote any lyrics,” Iero got right to work and penned all the words for band’s debut — due in January via Epitaph — in the span of a week, among them the tune “Murder Was the Case They Gave Me.”

Wow! We think nearly everyone, especially Snoop Dogg, would agree that’s a catchy title. Not bad for a rookie. “I was sitting in my apartment, playing the songs, and the words kind of came to me, and I was really proud of them too,” he said.

Iero cites 1980s hardcore music and horror movies as influences for Leatherhead, and insists the project is sonically far from My Chemical Romance — which could prove disappointing to some. “People that get into Leathermouth because of my past bands… I think they’ll be kind of bummed out. It’s definitely a lot different.”