Maya Arulpragasam might not be a name on everyone's lips, but with "Paper Planes" now a breakout smash, pop's artful revolutionary mouths off about becoming a mother, "polluting" the mainstream, and her surprising new family ties. 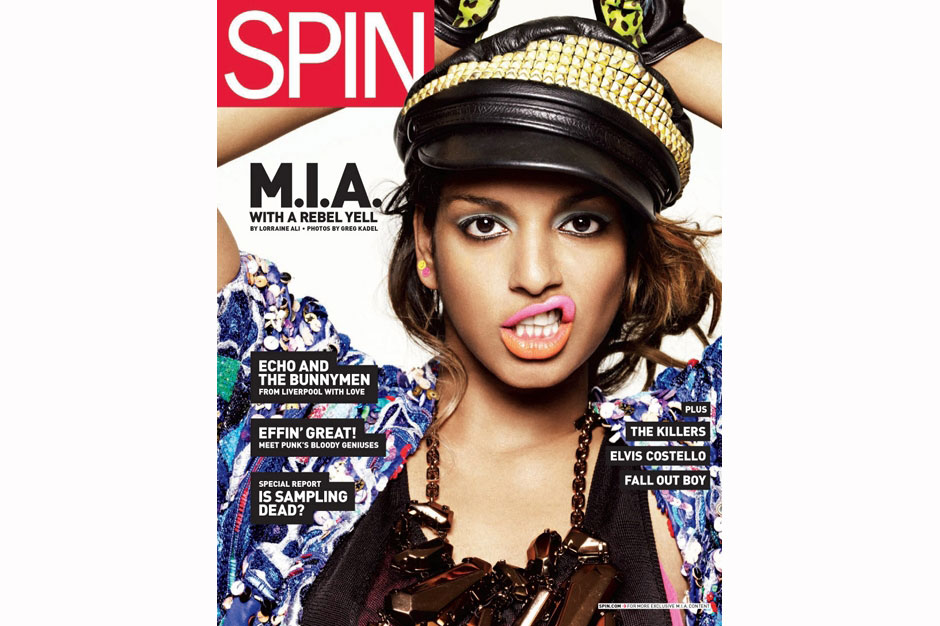 M.I.A. is pregnant. And not just with revolutionary ideas for her next record. The British-Sri Lankan vocalist/visual artist/producer/record-label founder/clothing designer, born Mathangi “Maya” Arulpragasam, is due to give birth in February, and despite what you may have read online, it’s not Kanye’s baby. (Daddy is indie-rock guitarist Benjamin Brewer, son of Warner Music CEO Edgar Bronfman Jr.) As for the sex of the child? She’s pretty sure she knows, because, well, a clairvoyant bird told her. “In India, they have these parrots who tell your fortune,” says M.I.A., lowering herself into a folding chair at the spartan home studio of her Los Angeles–based production partner Switch. She’s in town to do some work on her next record and hear a new Jay-Z remix of her track “Boyz.” “They come and pick up cards for you. The guy who read my cards said, ‘When you were born, your parents thought you’d be a boy, so you came out with a lot of male energy. You can do a lot of things that men can do. You’re brave, like a dude.’ There’s a lot of male energy in me that needs to be exorcised, that’s how I know it’s gonna be a boy.”

Forget seeking advice from Madonna’s ob-gyn, because M.I.A. has her own unorthodox ideas on how to proceed, and that’s what makes her recent commercial success all the more remarkable. Nearly a year and a half after the release of her critically acclaimed second album, Kala, the 31-year-old is grabbing the attention of a public who should consider her culture-jamming ways far too weird. Go ahead — try to think of an artist who’s combined Baltimore club beats, separatist slogans, Bollywood homages, multilingual slang, Clash samples, and vivid refugee tales on one album and made it out of her bedroom, let alone onto a major label or high on the Billboard charts? Unlike her peers, many of whom still sound staunchly rooted in the prosperous Clinton years (Gwen and Missy among them), M.I.A. clearly lives in our post-NAFTA/9-11/Abu Ghraib/AIG world.

Still, it took a Trojan horse called Pineapple Express — and some serendipity — to launch her into the mainstream. A trailer for the stoner comedy featured the gun-shot-and-cash-register chorus of her “Paper Planes,” and suddenly this woman who’d rapped about Darfur, the PLO, and Trinidad’s hardest shantytowns was playing back-to-back on your local morning zoo with that sugary breakfast cereal known as the Jonas Brothers. The unlikely hit, which includes the hook “All I want to do [bang, bang, bang, bang, ka-ching] is take your money,” leaked into the American consciousness right about the time those mortgage companies — who’d been taking our money — imploded, bringing the economy down with them. At press time, she’d sold 1.3 million downloads of “Paper Planes,” and Kala had risen to No. 1 on Billboard’s electronic album chart and No. 8 on the hip-hop chart. (This month she’ll debut a digital EP featuring the Jay-Z track.)

Suddenly, the five-foot-three artist’s power-to-the-people slogans felt as marketable as “Get Ur Freak On” did ten years earlier. “I’m glad ‘Paper Planes’ happened when it did,” she says, sipping a Cherry 7-Up. Her maternity wear is a pastiche of stretchy pieces from her nonpreggie wardrobe: a Day-Glo leopard-print bathing suit under a sheer lavender sundress, accented by a pair of worn tiger-striped high-tops. On anyone else, this combo would induce nausea. On M.I.A., it looks cutting-edge cool. “The goods were there to back it up,” she continues. “It was much more relevant than when people were like, ‘Yeah, I got my Hummer and things are good.’ ”

Now luxury-SUV rollers like T.I., Jay-Z, Lil Wayne, and Kanye West have sampled her (“Paper Planes” figures prominently on their hit collaboration “Swagga Like Us”) and fashion hounds wear her 1,000-watt, Malcolm McLaren–meets-Basquiat designs. In the last six months, the Brooklyn, New York–based fine-arts grad has launched her own clothing line, Okley Run, at New York’s Fashion Week (a bright, busy collection that includes the $180 watermelon hoodie and $85 Afrika leggings), birthed the new label N.E.E.T. (Not in Education, Employment, or Training, or teen spelled backwards), signed and is producing Baltimore underground star Rye Rye, and funded a new primary school in war-torn Liberia. In fact, M.I.A. became so determined to pursue all her different interests that in June she announced onstage at Bonnaroo that she was playing her last gig. She admits now that the proclamation was a bit premature. “I wanted to be more creative, make new kinds of art, go back to college, maybe make a film,” she says, with characteristic casualness. “Nice ideas, but I like making music, too, so they didn’t really last.”

How does an artist who aligns herself with refugees, revolution, and ragga negotiate fame, the high-flying world of fashion, and marriage into one of America’s wealthiest families? “The word fiancé makes me feel so, you know, French,” M.I.A. says with a laugh when discussing Brewer, a potential heir to the Seagram’s beverage fortune. “When he asked me out on a date, I thought, ‘I don’t know,’ ” she says. “It’s like crossing over to the other side. I’ve always had that fuck-the-system mentality, and his dad is so ‘the System.’ But then, they’re the most liberal family — they bootlegged alcohol, for God’s sake. They’re rich because they threw big, illegal parties, so I don’t mind.

“Still, I know I’ll catch flak,” she says, a slight exasperation in her voice, as if she’s already analyzed the subject a billion times over. “But I think I would’ve been screwed either way. I kept dating guys who were broke, who came from the streets, or from backgrounds like mine, but they didn’t necessarily treat me any better. My fiancé is really a great guy.”

For a girl who recently finished a tour dubbed “People vs. Money,” familial ties with the Bronfmans may appear hypocritical, but as M.I.A. says, “What can you do? I fell in love. It is what it is.” In retrospect, the lyrics to Kala’s “Bird Flu” seem prescient: “Streets are making ‘em hard / So they selfish little roamers / Jumpin’ girl to girl / Make us meat like burgers / When I get fat / I’ll pop me out some leaders.” Is it another case of a bird — or at least a bird-themed song — predicting M.I.A.’s fate? She laughs at the suggestion that she knew any of this was coming, though she will say that her late maternal grandmother was an avid drinker of Martell cognac (a Seagram’s product) and believes that, through heavenly intervention, Gran brought her and Brewer together. “She was, after all, Seagram’s number-one customer,” says M.I.A. proudly.

Eccentrics, militants, farmers, and intellectuals — all are represented in M.I.A.’s DNA. She likes to tell tales of growing up in Sri Lanka between her mother’s creative family and father’s pragmatic clan. Their influence is not only reflected in M.I.A.’s art and music, but in her conversation as well. She can talk about the state of the union one minute, then why couture clothing is so boring the next. Then address Wall Street greed and water birthing. She uses terms like “intellectual currency,” then refers to change as a “chuggy thing.” But when the subject of music comes up, she stops to ask, “Where the fuck has all the rebellion gone?” then pauses, as if waiting for an answer to materialize on the mixing board in front of her. “Music is still reliant on the same shit: sex, drugs, and rock’n’roll. They don’t use it as a tool to stick their finger up at the rest of the world. It’s like, ‘Yeah, I got a shorty coming up to me, and we’re about to have some liquor, chill in the SUV.’ Maybe it happens every day like that in R. Kelly’s world, but it’s not realistic for me.”

M.I.A. does not own a car or even drive for that matter, but even if she did, she’d be more likely to write songs about the kids in India who were paid two cents an hour to make the vehicle’s after-market seat covers than the hoochie riding shotgun. “If you’re having problems paying rent, then rap or sing about it,” she says, lifting her soda can in the air as if it were a symbol of resistance. “Or is life really that great for everyone else, and I’m the biggest pessimist in the world?

“I have to know, ’cause now I’m having a child,” she says, looking down at her swollen belly. “Do I need to turn it up or tone it down?”

Read more about M.I.A. in the December 2008 issue of SPIN, on newsstands now.