This '80s-lovin' electro-cutie's self-titled debut is becoming a dance floor staple. Click here to find why. 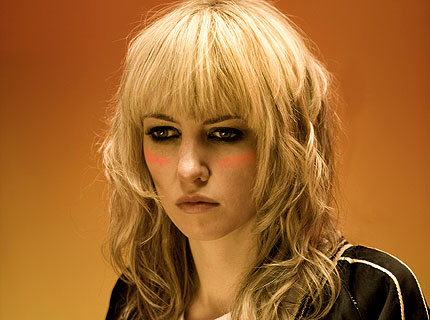 What? New Zealand-born popstress Ladyhawke is revamping the synth-driven ’80s sound of Cyndi Lauper and Pat Benatar with sharper beats and guitars, glossier production, and new millennial stomp and sass. But unlike her contemporaries — including Annie and Peaches — Ladyhawke is swapping quirk for sincerity, and it’s this sound that launched her self-titled debut album into the charts in Australia, New Zeland, and the U.K. Today, the album drops in the U.S., and with sleek synthesizer lines, down-tempo beats, and sultry vocals, it’s the perfect soundtrack for a night on the dance floor — especially with the four-to-the-floor disco sheen of “Paris Is Burning” (available to download below).

Who? The woman known as Ladyhawke was born Phillipa “Pip” Brown in Wellington, New Zealand, in 1981. Despite suffering from Asperger’s syndrome, a mild form of autism, Brown showed an interest in music growing up, as her mother was a singer and her stepfather a drummer. In 2001 Brown’s music career began when she joined proto-punk younglings Two Lane Blacktop as lead guitarist; the band would release a few EPs and tour the states briefly before breaking up in 2003.

Shortly after the split, Brown moved to Melbourne, Australia, where she played in several other bands, including electro duo Teenager. However, she soon began writing songs and playing numerous instruments, and developed her Ladyhawke persona. By 2007, she moved to London where her career as Ladyhawke took off. Soon she was recording her self-titled debut album for Modular records, and few months later the work paid off — the strength of the album’s two singles, “Back of the Van” and “Paris Burning,” put Ladyhawke on the map for dance music fans across the globe.

Ladyhawke: Ten Things You Never Knew About Me