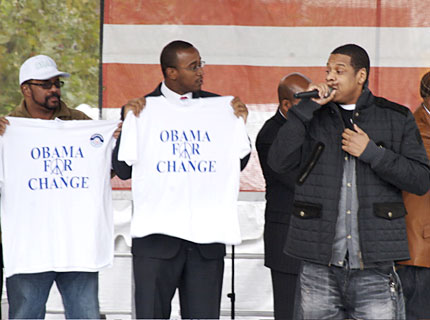 With the presidential campaign entering its final stretch, a cavalcade of hip-hop royalty turned out Monday in North Philadelphia — the biggest city in one of this election’s key swing states — to get out the vote for Democratic nominee Barack Obama. Jay-Z, Beyonce, Diddy, and Mary J. Blige took the stage on the city’s famous Broad Street, near the campus of Temple University, to support Obama’s candidacy before an estimated crowd of 10,000.

“I need y’all to be really really quiet for this. I need you to really understand what I’m telling you,” Jay-Z said, according to the Philadelphia Inquirer. “Rosa Parks sat so Martin Luther King could walk. Martin Luther King walked so Obama could run. Obama’s running so we all can fly.”

See photos from the rally below!

The crowd in North Philly / Photo by Brett Brownell

The crowd in North Philly / Photo by Brett Brownell