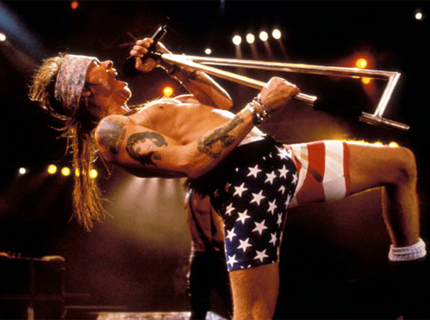 The road to Guns N’ Roses’ Chinese Democracy has been long (15 years since the group’s last effort, The Spaghetti Incident?), expensive (a rumored $13 million), and, quite frankly, ridiculous (see: long and expensive).

But, finally, the album is set to be released Sunday, Nov. 23! And you canread our review here.

Then, take a moment to relive the madness leading up to the record’s arrival, including: countless delays, an April Fools Day album review, visions of free soda, thealbum art and tracklist, and a review of the first radio single. You know Axl would want you to.

Axl: Chinese Democracy Out in ’06
“It’s not about being a control freak,” Rose stated to New York magazine. “It’s about being maybe smart enough to go, ‘No, that’s a bad idea.'” More>>

Release of Guns N’ Roses’ Chinese Democracy Delayed…Again
So much for 2006 (or 2007, for that matter), as a previously announced release date of March 6, 2007, was yet again cancelled. “The good news is that all of the recording for the album has been completed,” read a post on the band’s website. More>>

Chinese Democracy Gets Album Art, Tracklist, and a Release Date!
Best Buy teams up with Rose to release the near-mythical record on November 23, right before Thanksgiving. Turkey, football, and Chinese Democracy — is there a more heartwarming holiday grouping? More>>