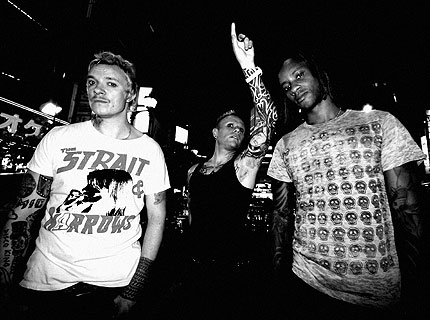 In anticipation of the release of their fifth studio album, Invaders Must Die, the Prodigy are offering a free download of the record’s title track, available for one week only beginning today at 2:30 P.M. EST via the band’s official website. What’s more, as of Friday, the electro crazies will also be streaming a companion hi-def video on their site, which will be available for free download until December 5 on the Xtival channel on Xbox Live.

So, what can we expect of these freebies? Well, we already know Dave Grohl makes a drumming cameo on the new album. But according to the band, the record is far more than the talented Mr. Grohl’s flavor of the week: It’s “40 minutes of having your head battered by future nostalgia, serotonin levels twisted by feel-good horrorcore and your synapses snapped by whiplash attitude.”

“Invaders Must Die is awash with references to the free party generation, thundering along like the mother of all E-rushes, all hairs tingling, spine jumping and lips buzzing. But not a retroactive arms-in-the-air, water-sharing nostalgia trip, but a set fuelled by punk’s saliva-dripping rabid snarl.”