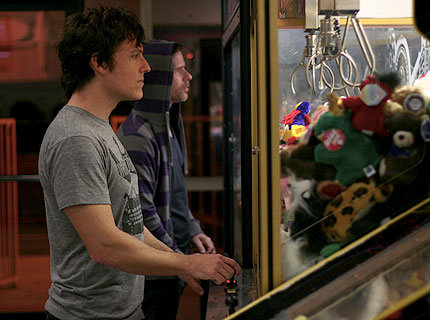 What? Typically, instrumental rock has the tendency to be maudlin (Godspeed You!, Black Emperor), sprawling (Explosions in the Sky), or experimental (Tortoise). However, such is not the case with Los Angeles, CA, duo El Ten Eleven, who compose tightly wound tunes with plenty of punch. While bassist/composer Kristian Dunn and drummer Tim Fogarty displayed a knack for tedious nuance on 2004’s self-titled debut, their third record, These Promises Are Being Videotaped, is packed full of danceable melodies that put Ratatat to shame. Their sound is just as ideal for basement dance parties and Sega Genesis videogame soundtracks alike.

Who? Dunn and Fogarty met in 2003 while working together in an experimental project that was eventually disbanded. Prior to the group’s sophomore release, Every Direction Is North, Dunn wrote the soundtrack for the 2007 film Helvetica, with Fogarty assisting him in performing much of the music.In January 2008, El Ten Eleven released the single “Jumping Frenchmen of Maine” through their MySpace page, offering listeners the option of paying what they wanted for the song, a true sign o’ the times.